Crocheted flowers are pretty much my favourite thing to make and I adore adding beads into my work too, so the Gertrude cushion
project was a real joy to design and make. I wanted to create a vintage feel and chose my yarn shades accordingly.
I think the little lime green beads provide a lovely pop of colour on the leaves of the dainty crochet blooms.

I adored the velvet smocked cushions that my Auntie Muriel had on her bed when I was a child in the 1970s. I used to love running my
fingers over the velvet to play with the pile and found the smocked stitching fascinating. The cushions were just so enticing and luxurious
that I remember thinking that I would definitely have some on my bed when I was old enough!
I have previously recreated the style of these cushions in a knit design I called Madeleine, which was published
in my book ‘Homespun Vintage’, but I have always wanted to create a crochet version too.

When working on the Muriel cushion project I decided to add pretty bobbles instead of smocked style stitching to make
a simple accompaniment to my Gertrude cushion, which features pretty flowers and beads.
I have always struggled with the way crochet worked in the round can look like it has a ‘scar’ running through it,
so my challenge for this project was to design something that would hide the way slip stitches appear
without having to fasten off yarns at the end of every round.

To make Gertude Floral cushion project you will need:

Note: only small amounts of contrast colours and only a small amount of 2nd ball of main shade are used.

To make Muriel Round cushion project you will need:

Other:
Round Cushion Pad 35cm diameter

Photograpy with thanks to Inside Crochet Magazine and Marvic Photography. 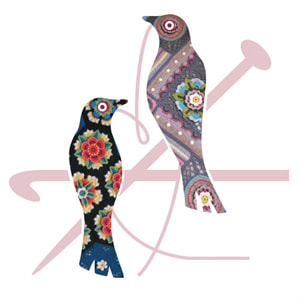